With les Roches Blanches opening its doors as the first 5-star hotel in pretty little fishing port of Cassis things are moving upmarket. This quiet Mediterranean holiday destination, preserved from mass tourism, has built a future from its past.

Cassis came close to catastrophe in the 50s when Brigitte Bardot wanted to buy the ruins of the citadel castle. The Archdiocese of Marseille who owned the property refused point blank. “Otherwise,” says the mayor of Cassis, Danielle Milo, “we would have just been another St Tropez.” In fact, Cassis turned out to have quite a different fate in store. Here there are no brand stores, no millionaires’ yachts nor pretentious boastfulness to be seen here. The local accent can be heard in Cassis as the shop-owners call out to one another in the streets, and the town remains vibrant the four seasons through with almost 8000 inhabitants setting the pace.

“In August, we tend to stay at home, but the rest of the year we meet up in the bars down at the marina where everyone knows each other,” explains the ex-football player, Jean Tigana, who now owns vineyards on the hills of Cassis. The charm of the place lies in the surrounding area, with the Calanques on one side and on the other, Cap Canaille the highest sea cliff in Europe (363m), Cassis is set apart from the rest of the world, in particular from the city of Marseilles which it is difficult to believe is so nearby. The pebble beaches and secluded creeks ward off too easy sunbathers and have helped to avoid the town becoming a popular success which would have stolen its soul. However, this Mediterranean Eden until now was sorely lacking a luxury hotel – which is no longer the case.

On the edge of the rocks, hidden amid the pines, the white, light and linear architecture of Les Roches Blanches Hotel makes it the best kept secret this summer. Once a family home it became a hotel in the 30s and was long associated with good times in Cassis and was frequented by celebrities such as Winston Churchill, Edith Piaf, Maurice Bejart and Jorge Amado. The hotel was sold to two French families and remained closed for many long months. Quite recently re-opened, Les Roches Blanches guarantees its guests an enchanting change of scenery. Standing opposite Cap Canaille, the garden follows down to the sea in a succession of trellises and suspended swimming pools with patios on the promontory and a horizon leaving room for the imagination to wander. You would almost think you were in the tropics. The architect Monika Kappel has managed to tuck the bedrooms into all sorts of places in a sort of architectural labyrinth which is more like a luxurious villa than a traditional hotel. Partly inspired by Art Deco the interiors are superb, particularly the restaurant bar overlooking the sea and decorated in cosy English velvet (Designers Guild). 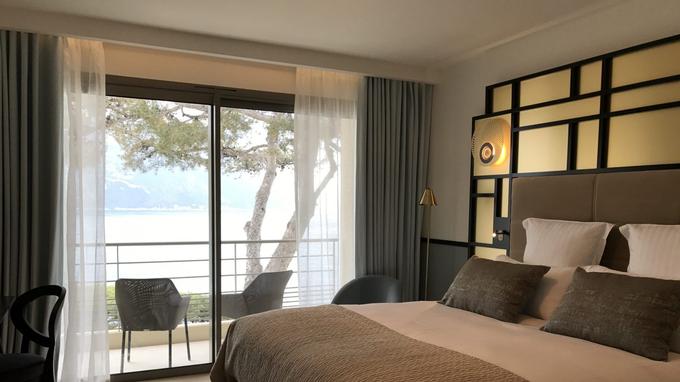 Read the rest of the article online

n accordance with the data protection legislation, we inform you that this website uses cookies for statistical purposes. By clicking on the 'Accept' button, you authorize the third-party services that we use to optionally deposit one or more cookies on your computer. To learn more, consult the legals mentions.

I decline I agree